Dr Robin Smallwood was Dean, Faculty of Anaesthetists of the Royal Australasian College of Surgeons (1986-87). In this blog post, his wife Rosalind Smallwood, and colleagues, Dr Geoff Gutteridge and Professor Barry Baker AM, remember his great contributions to the faculty and to anaesthesia.

Early years
Robin William Smallwood died in October 1987, aged 53, after resigning during his second term as Dean of the Faculty of Anaesthetists, Royal Australasian College of Surgeons (the predecessor of today’s ANZCA). He had been Director of Anaesthesia and Intensive Care at Melbourne’s Austin Hospital since 1969, and was diagnosed with bowel cancer in late 1986. 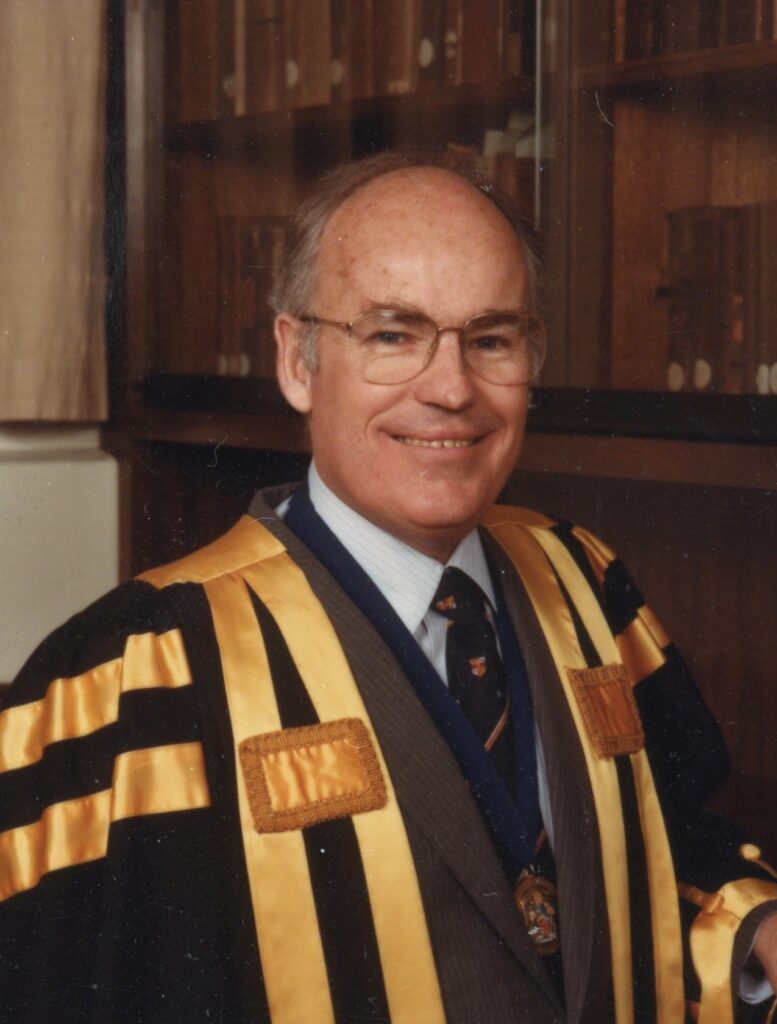 Dr Robin Smallwood, dressed in the regalia of the Dean, Faculty of Anaesthetists, c.1986

Robin was born in Penang, Malaysia (formerly Malaya), where his parents were part of the expat community before World War II. His father Ian, a science exhibitioner from Cambridge University UK, was an insurance executive. His mother Dr Margaret Smallwood, a University of Melbourne medical graduate, worked for the Malayan Medical Service providing care for mothers and children.

In 1941, with the imminent arrival of the Japanese, Australian women and children were evacuated back home, while Ian and Margaret remained and were interned as POWs. After Singapore fell in February 1942, Ian was sent to the Thai-Burma railway and Margaret was interned in Changi, where she continued her care of mothers and children. 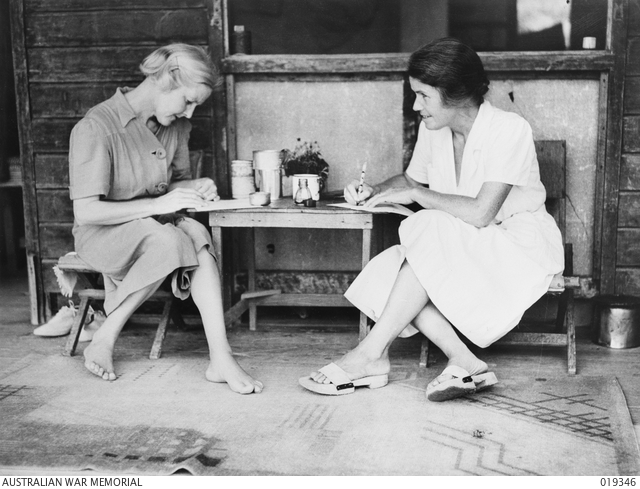 Singapore. c. 1945. Mrs Nixon of Cumberland, England, and Dr Margaret Smallwood of Melbourne, Vic. Dr Smallwood has been caring for the children for three and a half years in the internment camp at Singapore. (019346, Australian War Memorial)

Robin and his younger brother Richard returned to Melbourne in their grandmother’s care, living in South Yarra until both parents were released in 1945. The reunited family moved to a permanent home in Ivanhoe.

Both boys initially attended Ivanhoe Grammar, later becoming boarders at Geelong Grammar. After completing Year 12 (Matriculation) in 1952, Robin enrolled in medicine at the University of Melbourne, living in residence at Trinity College. In 1955 he met his future wife Rosalind Steeper, an arts undergraduate resident in Janet Clarke Hall. Robin graduated in December 1958 and the couple married in January 1960.

Training as an anaesthetist
Robin began his anaesthetic training in 1961, with a registrar position at Footscray and District Hospital, responding with enthusiasm to the practical teaching of the Director of Anaesthesia, Dr George Robinson.

This was followed by anaesthetic registrar positions at the Royal Children’s Hospital, Royal Women’s Hospital and St Vincent’s Hospital (SVH), Melbourne. He obtained his Fellowship of the Faculty of Anaesthetists’ diploma in 1964. After several years as a staff anaesthetist at SVH, in 1967 he continued his training with a year at the Welsh National School of Medicine in Cardiff UK, headed by Prof. William Mushin. He returned to Australia early in 1968, and after a year in private practice became the first full time Director of Anaesthesia at the Austin Hospital in 1969.

Austin Hospital
The Austin Hospital in 1969 was a medium size community hospital, with major development envisaged after the introduction of the University of Melbourne Clinical
School. The Department of Anaesthesia had only two full-time senior staff, four operating theatres and no intensive care unit (ICU). Patients needing mechanical ventilation were ventilated in the anaesthetic recovery room or the general wards with a special nurse. In 1970 a 4-bed ICU was established in a modified ward area, but mechanical ventilation of patients with acute spinal cord injuries continued in the hospital’s distant acute spinal ward.

With the university’s arrival, a major rebuilding program began for a new 9-level hospital building – the Harold Stokes block. Although the design was completed by 1973, construction was delayed with the new operating theatres and ICU finally opening in 1983. 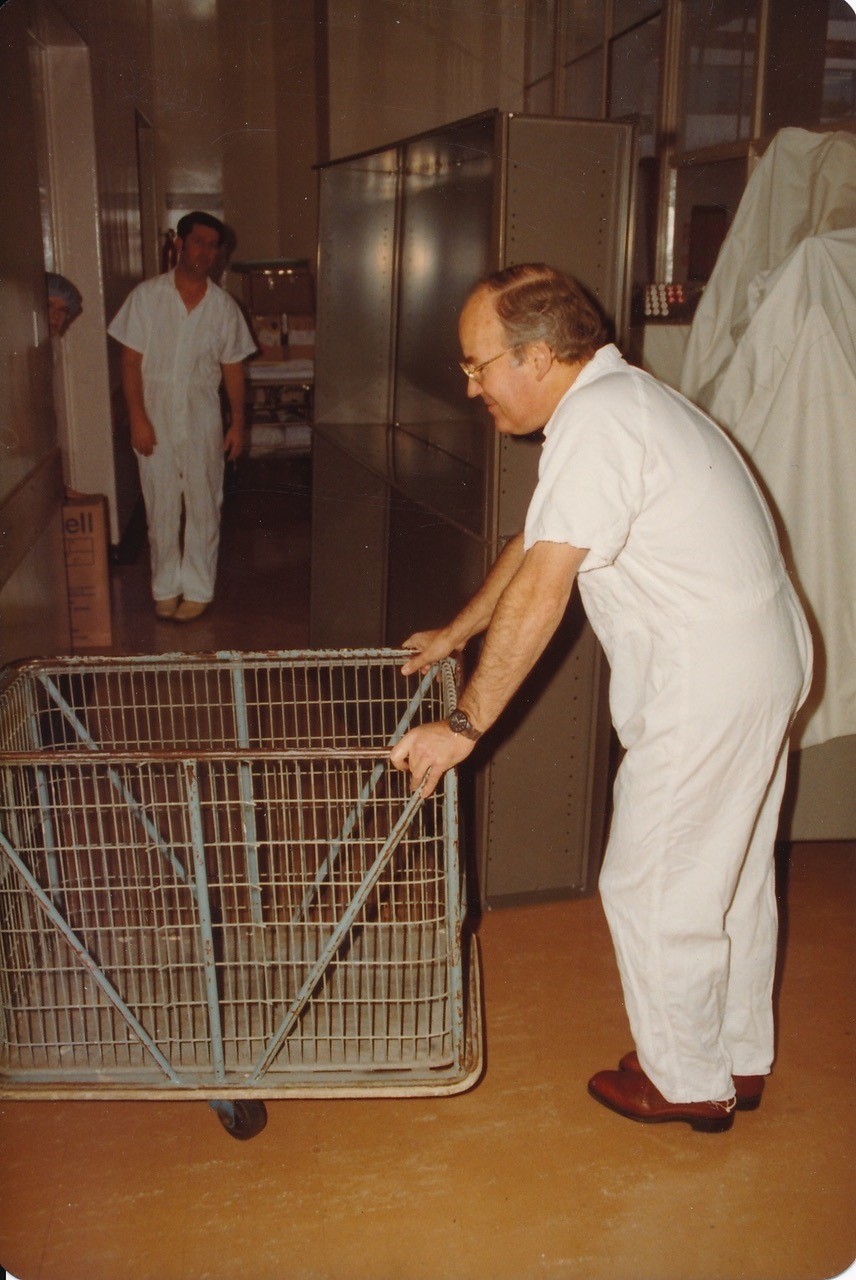 Throughout this time Robin was heavily involved in the design, evaluation and commissioning of the 8-operating theatre suite (incorporating two large laminar air flow theatres), the anaesthesia recovery room and a 14-bed ICU (with a novel laminar air flow design in the individual bed bays). In recognition of this, in 1978 Robin was appointed Director of Anaesthesia, Intensive Care and Theatre Services.

As the hospital evolved towards a tertiary level institution, there was parallel development of the department. With the hospital’s expanding role and the growth of specialist surgery, Robin had to battle for an appropriate increase in the number of full-time staff specialists – from two in 1974 to 10 in 1988. The numbers and complexity of the surgical case load were also increasing, especially with vascular, thoracic, neuro- and orthopaedic surgery.

Cardiac surgery began in 1986 and liver transplantation shortly after. By 1986 the ICU had opened seven beds with dedicated staff specialist cover throughout the week.

Departmental Staffing policy
This growth by the Department of Anaesthesia was not without its difficulties. There was significant concern within the hospital administration about the staff numbers Robin proposed. He had limited support within the surgery division, but met active resistance within the medicine division, especially over the position of intensive care in the hospital structure.

With an annual budget meeting (c.1980) approaching, Robin began a detailed process to precisely document the individual clinical and non-clinical duties of an anaesthetist and an intensivist. Night after night at home, using graph paper on the dining room table, he drew up a chart to calculate the specialist staff establishment required to ensure maximum patient safety and clinical service delivery.

His family recall his arrival home after that meeting, when he reported with a smile he was the only department head to be given the allocation sought.

Faculty of Anaesthetists, Royal Australasian College of Surgeons
Robin was a farsighted planner. In 1969, after taking up the Austin Hospital appointment, he became a member of the Faculty’s Victorian Regional Committee. In 1970 he became an anaesthesia examiner (1970-83) followed by becoming an intensive care examiner (1978-83). He was elected to the board of the faculty in 1976.

With his staffing-establishment concept secured in Victoria, he suggested it could be put to good use in other states. Working with fellow board members Maurice Sando (South Australia) and Ross Holland (NSW) the trio authored a landmark article on staffing in Anaesthesia and Intensive Care. 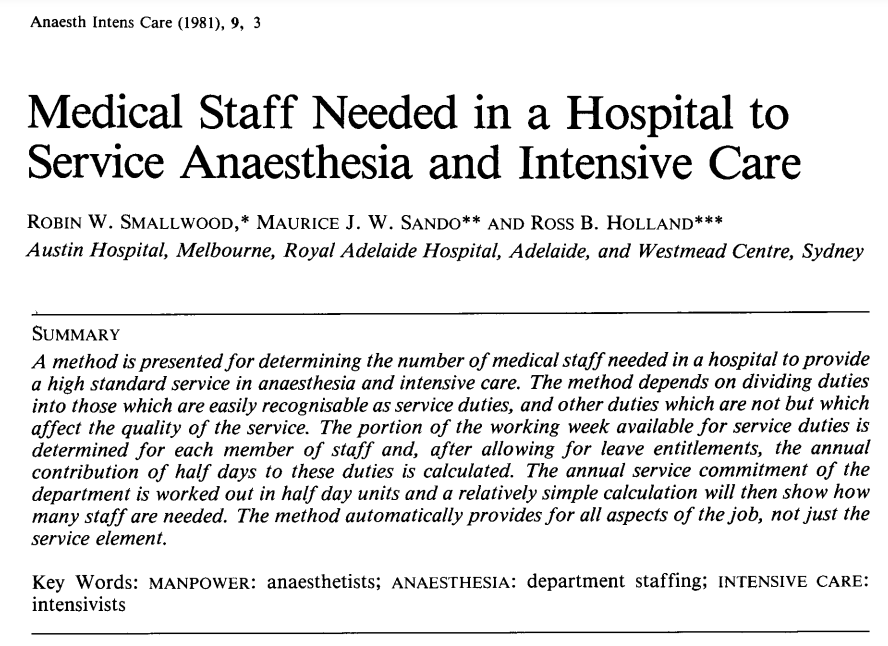 This set out the faculty’s thinking on several important subjects: How time should be apportioned between clinical service and other duties, what those other duties might be, and how many trainees could be supported by senior staff so that effective experience and teaching would be available. These concepts were soon integrated into the faculty’s guidelines when departments were to be accredited for teaching trainees.

Education and training
Early in his specialist career, Robin’s thinking was directed towards training and continuing education for specialist anaesthetists. He used his faculty time to promote patient safety through education and clinical experience for trainees, with an emphasis on rotational training programs. In 1978 he was instrumental in establishing the Northern Suburbs Rotational Training Scheme based at the Austin, in conjunction with Preston and Northcote Community Hospital, Repatriation General Hospital and Bendigo Base Hospital.

This was Victoria’s first rotational training program in anaesthesia.

In 1979 Robin introduced a radical form of trainee job-sharing at the Austin, following an approach by two of his female registrars, Julia Fleming and Kate Clark, who both became pregnant during their registrar years. With accreditation approval from the Faculty, these registrars were able to share their training, working three months on/three months off, enabling them to start their families while continuing their specialist careers. 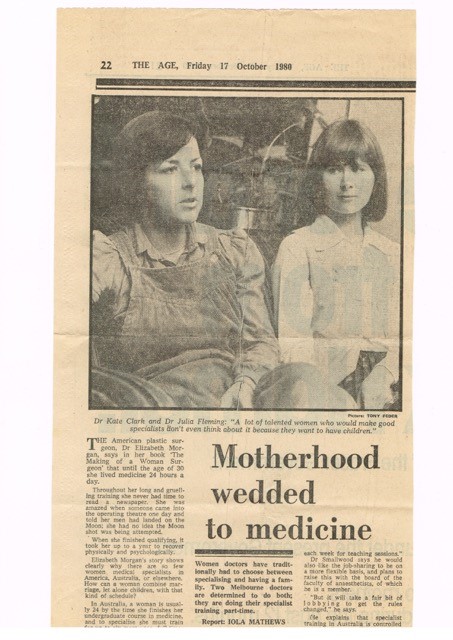 Newspaper clipping from The Age, “Motherhood wedded to medicine” by Iola Mathews, 17 October 1980

Research
Robin encouraged future research with a bequest in his will, believing this would become a significant element for the specialty. This bequest was presented to the College on 28 February 2015, and is managed by the ANZCA Foundation. 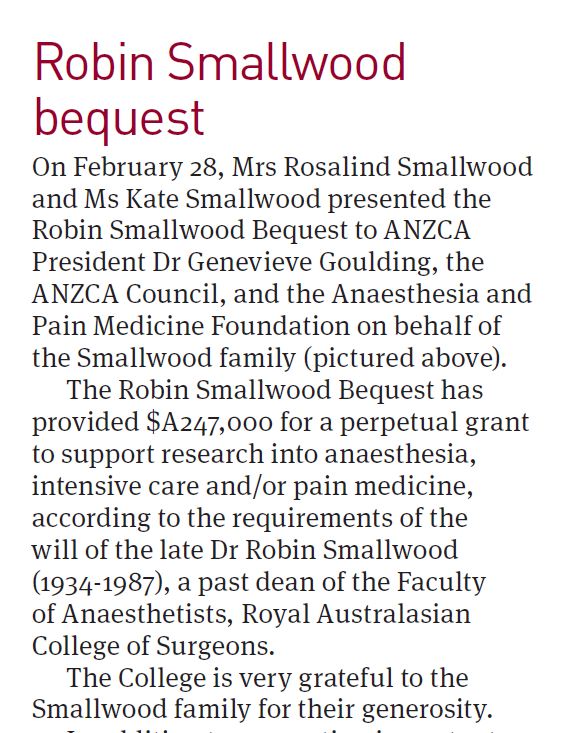 Article from the ANZCA ‘Bulletin’, March 2015

In the late 1970s the family built a holiday house at Point Lonsdale where Robin enjoyed summer holidays, socialising and surfing. He is buried in the small Point Lonsdale cemetery, with the gravestone epitaph “He liked things working properly”.