Anaesthesia and Pain Medicine on the Thai-Burma Railway

When Singapore fell in February 1942, the Imperial Japanese Army suddenly found itself in control of some 60,000 Allied prisoners of war (POW), most of whom were British, Australian or Dutch.

Approximately 22,000 POWs were Australian soldiers and among them were 106 doctors. Conditions in POW camps differed throughout the region but the majority of Allied POWs experienced “…malnutrition, disease, overwork, extreme violence and the denial of basic medical facilities”.

In capturing tens of thousands of prisoners of war, Japan had a ready-made source of labour which could be utilised to meet infrastructure needs. Supply lines were long and unwieldy, and many of the prison locations were barely able to support the needs of a local population, let alone a new, large, hungry population of the Imperial Japanese Army and its prisoners.

Captain Charles Rowland Bromley Richards, better known as Rowley, wrote about the feeling of helplessness which was coupled with the stress of having to practise “Makeshift Medicine”.

“When you knew that with the blokes who had malaria all you had to do to help them was to give them some quinine, that was heartbreaking, absolutely.”

Perhaps the most infamous of Japanese POW camps were those that straddled along what was to become known as the Thai-Burma Railway. There, approximately 20% of the Allied POWs died during its construction. The large population of local labourers, estimated to number around 100,000, had an even higher mortality rate. Diseases that could be treated or prevented in the home environment could quickly become fatal. Forty-four Australian doctors worked along the Thai-Burma Railway, as well as six Australian dentists.

Anaesthesia and pain relief
Dunlop listed periodic issues of bandages, gauze, and iodine solution, but didn’t mention anaesthetic agents or other forms of pain relief. Instruments and equipment had been confiscated in the early months of imprisonment, and any that remained or were subsequently gained, were “…possessed by cunning or ingenuity, since no issues were made”. In his post-war statement to the International Military Tribunal for the Far East, Lieutenant Colonel Sir Albert Coates, another doctor on the Thai-Burma Railway, reported being required to sign for a Red Cross package that consisted of surgical operating instruments and 11 bottles of chloroform, neither of which he received.

Most minor operations were conducted without anaesthesia and, while it’s true to say anaesthesia was scarce, it wasn’t completely absent. Chloroform made its way into camp on occasion, generally through trade with either Japanese soldiers or local Thai populations. Dunlop described gaining access to “novocain” and using it (1 – 2.5ml of freshly prepared 10% solution in distilled water) for spinal anaesthesia, which, he wrote “…sufficed for almost all operations on the abdomen and lower limb”.

In his military tribunal submission, Coates describes his daily routine as spending the morning dealing with tropical ulcers, and the afternoon amputating ‘…the legs of those men whose ulcers were past the stage of ever healing and in which gangrene had occurred”. Dunlop also writes about Coates’ “impressive record” of 120 lower limb amputations at the “55 Kilo” hospital, employing a cocaine solution of approximately 0.75ml of 2% solution, intrathecally.

Major Arthur Moon was another POW physician. He worked with fellow POW and renowned artist, Ashley George Old, to produce some exquisitely detailed paintings of the medical conditions of camp life, with meticulous clinical notes. These paintings and his diary, which also include clinical notes, are now held at the State Library of Victoria. 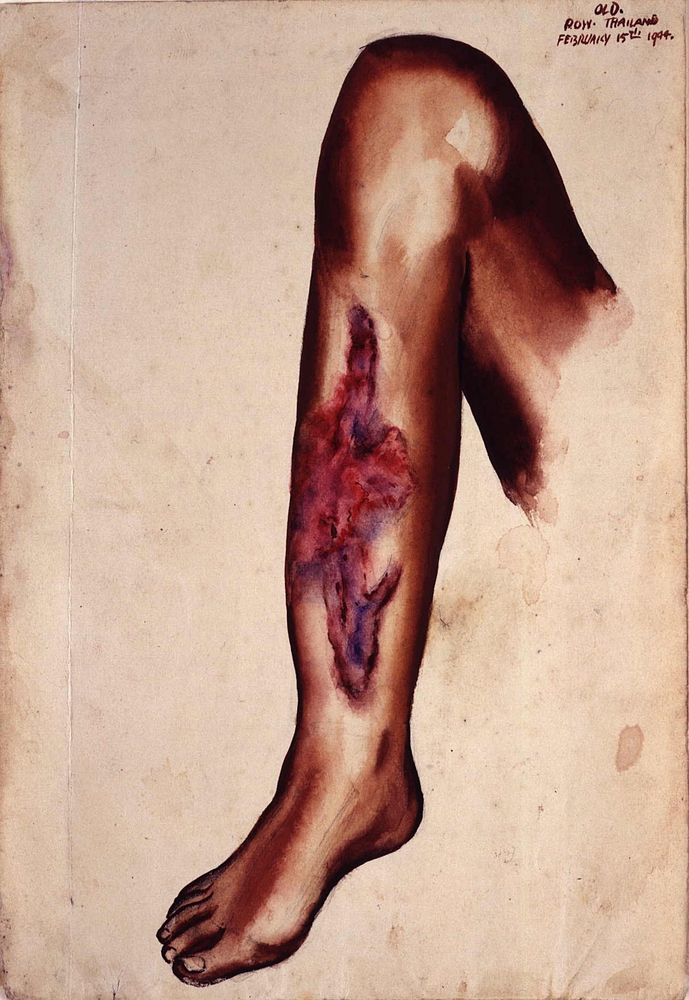 Working on the Thai-Burma Railway in April 1943, Private Day suffered a graze to his right leg, caused by a bamboo pole. It immediately became inflamed and almost inevitably developed into a tropical ulcer. Moon dressed it with a rice poultice, perhaps a trick he’d learnt from the local people, and while Day was able to rest, it improved. By late April, he had to be admitted to hospital and somewhere along the line, he’d picked up another scratch on his left leg, which had now ulcerated. His general condition and capacity to heal was compromised by also having beriberi. By June, the ulcer involved the tendon and bone. More rice poultices were used, and sulphonamide when it was available, until on 12 November, with 7 – 8 inches of exposed, dark, loose bone, an operation was necessary.

Moon makes no mention of an anaesthetic being used. And yet, the operation was performed, the dead bone was removed, and somehow, Day’s leg began to improve.

But, while Day’s leg seemed to be improving, Wilson’s leg needed to be amputated. The ulcer had exposed over 2/3 of his leg, and part of his foot. It had turned “black and gangrenous” around the edges and consumed much of the calf muscle.

According to Moon’s notes, eight inches of tibia was exposed and necrotic. Wilson was thin, “painfully thin and debilitated”, he wrote, a striking note by a man who had, presumably, become quite accustomed to seeing painfully thin men.

The operation was performed on 19 August 1943. A small amount of morphine was administered about 45 minutes beforehand, and anaesthesia has also been recorded – “Sod. Pentothal 0.5 grm, followed by about 2z of ether”. The operation “went to plan”, the bamboo saw worked well, and Wilson was also given 500cc of blood. That’s the end of Wilson’s story, at least as far as Moon recorded it in this diary entry. Hopefully Wilson survived, although Dunlop wrote that “about 50% of amputation cases succumbed, many of them after good healing”.

Access to drugs and equipment
Moon’s diary provides another glimpse into POW medicine, with an entry describing how Boyle and Hands, presumably Allied POWs, were sent off with a Japanese guard and a list of drugs and stores to purchase if possible. Dunlop recorded how “sick-welfare money from various national and unit sources was directed into a common pool”. The pool was then stretched as far as it could be to purchase necessities. The money was used to buy supplies from local traders, including pharmacists, and bartering was a common occurrence as well.

In addition to money and bartering, the resourceful POWs would and could make their own alternatives. Improvised cannulas were made from bamboo thorns, and Moon talked about a bamboo saw used in Wilson’s amputation. Catgut was rarely supplied, but enterprising POWs were able to use silk from RAF parachutes or a “locally prepared” catgut made from peritoneum of pigs and cattle which was “…trimmed in 6-metre ribbons of varying width, twisted on a winder and dried. Sterilization was effected at 130°F (54.4°C) for half an hour, after which it was put in ether for twenty-four hours, and finally in 90% alcohol and iodine”.

Anaesthetic agents were scarce, as were pain medications of any kind, and many operations were performed without either. Dunlop described how the ubiquitous nature of tropical ulcers gave medical facilities, particularly the ulcer ward, a “pre-Listerian” odour. Ingenuity abounded and, while many lives were undoubtedly saved by the ingenuity of POW doctors, when viewed through the lens of contemporary medicine, it all seems somewhat incomprehensible.