Ari Hunter has been volunteering with the Geoffrey Kaye Museum of Anaesthetic History since September 2015 when she undertook an internship to prepare a significance statement for the Bruck Inhaler. Since then, she has undertaken a range of research projects. The museum sponsored Ari to attend the 2017 Australian and New Zealand Society for the History of Medicine Conference (ANZSHM) in Melbourne during July.

I attended the ANZSHM conference as both a speaker and a listener.  My particular interest in the history of medicine is around the social relationships and motivations of those involved in the medical profession, both as practitioners and indirectly as the recorders of events.

The opening plenary from Barbara Mann Wall approached this topic from the perspective of the Catholic Missionaries stationed in Africa during the mid 20th Century.  The speaker demonstrated to us that the structure of the Catholic Mission Hospital enabled female practitioners access to higher medical training, and enough autonomy to run these hospital organisations in conjunction with the local people so that there was a real and lasting effect, on both the health and moral welfare of the community.  The plain fact that there were females even in these leadership roles, was at odds with what was happening in other parts of the western world.  The point was raised that ‘they only let the women deal with medicine in the colonies’, and the wider reaching social and political ramifications of this statement were implied, but left formally unsaid.

Moving through to the first panel session we were presented with a single image and the speaker gave a ten-minute presentation discussing what the image demonstrated or signified.  We heard from Margaret Boult on the importance of the interior of the 19th century lunatic asylum, from Christine Harrison on the inclusion and the importance of a bedside locker in a mid 20th Century mental health facility, and how this provided patients with a sense of identity and ownership of personal space.  Averyl Gaylor presented on the Mensendieck Principle, that discusses the indivisibility of beauty and health and how this idea how permeated through to our modern society through dance.  Finally, Eureka Henrich presented the image of a complete syringe kit that travelled with an Italian post war migrant. This signified that ideas of race, culture and difference that can be held in a single object.  These sessions were one of the highlights of the day, and presented an alternative way into each theme.

Other panel sessions throughout the day presented chronological accounts of interesting characters – many told with personal experience overlaid onto historical events.  Remarkable people such as Natalie Schlusser, who escaped the regime of dictatorship and Anna Petronella Van Heerden, the first Afrikaans speaking woman to become a doctor, came to our attention not just for what they achieved but for the way they chose to live their lives.

I presented in a joint panel with Tilly Boleyn (Museum of Applied Arts & Sciences), Rebecca Lush (Harry Daly Museum) and Monica Cronin (Geoffrey Kaye Museum) on Women in the History of Medicine.  The theme of any conference is to create discussion and present material that could be used to sway another’s way of thinking.

Our panel session did this.  We filled all the seats in our session, and created a space for a long and interesting question and answer session at the end.

Tilly began the session by framing women in collections, and bringing initiatives from the Guerrilla Girls and Countess into play.  She asked questions about the way women are represented in various medical and scientific collections around Australia, and how we can aim to change this so that fifty percent of the collection represents fifty percent of the population. 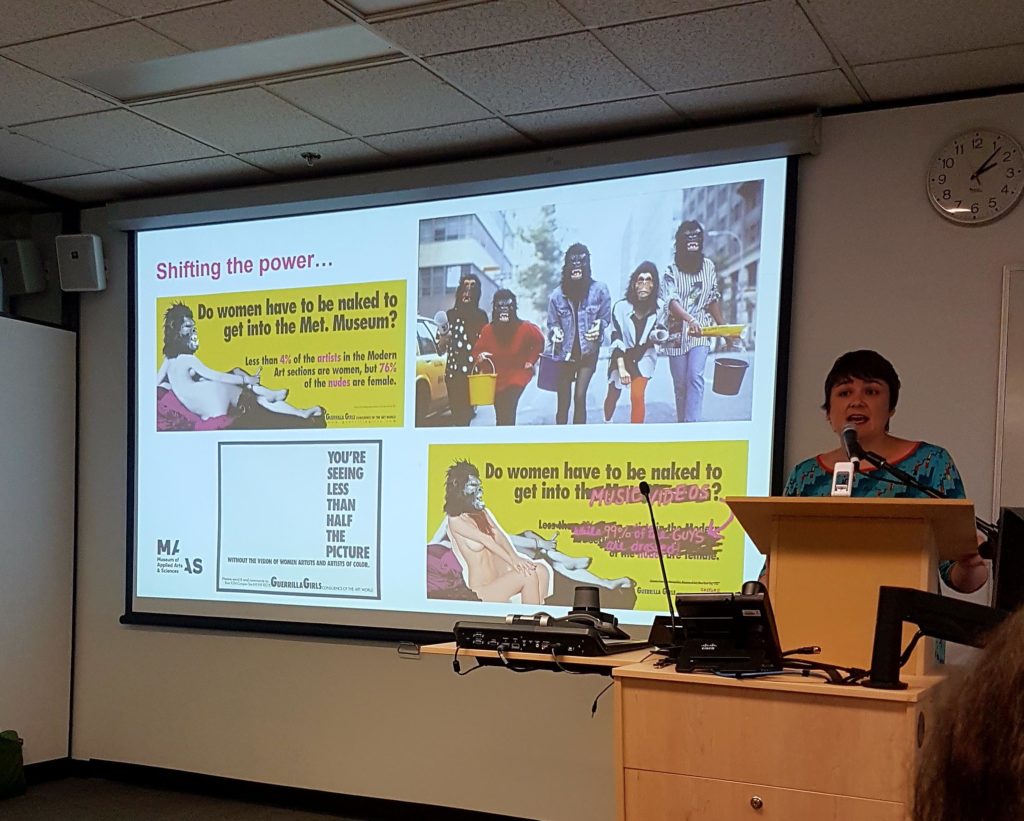 Rebecca broached the subject of the lens we use to research these women, and how imperative it is to understand the bigger picture before narrowing down.  She used Fanny Burney’s own account of her mastectomy as an example.  It was not until 2010 that the letter was published in its entirety, previously only portions were available, and these, without the context of the full letter, were open to dubious interpretation. 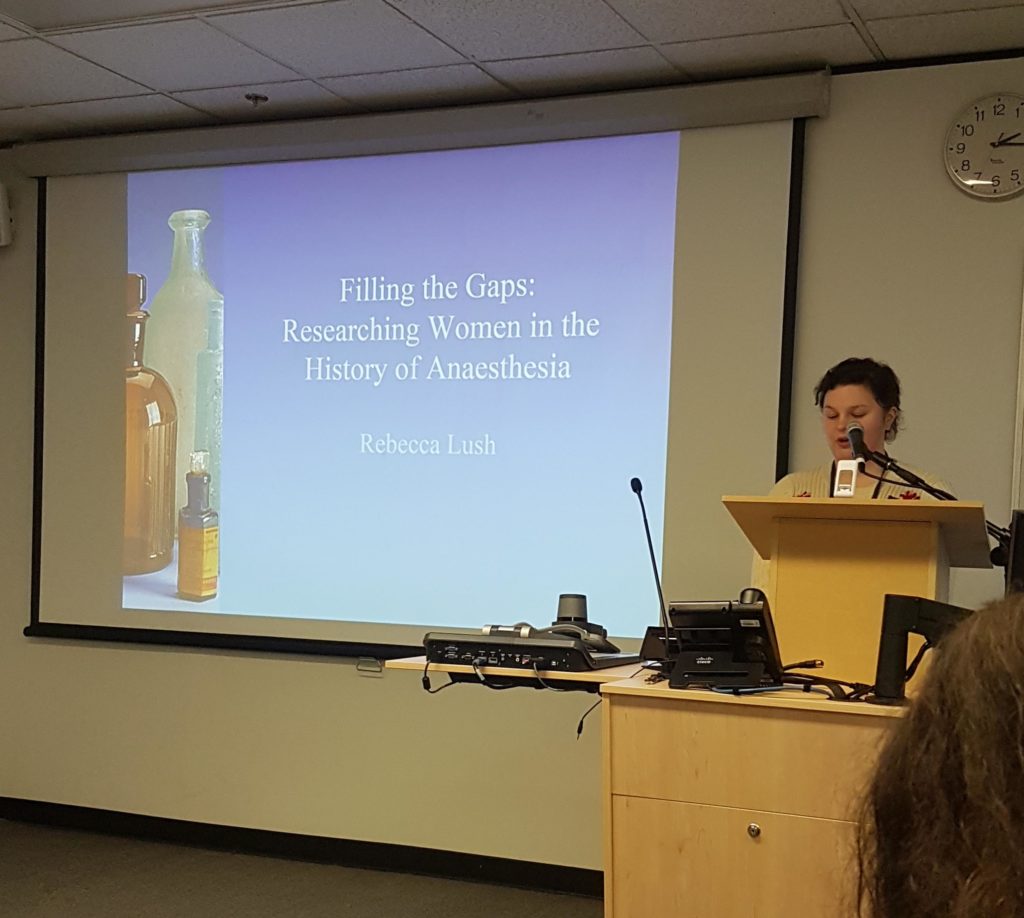 Monica dived into a survey of the ‘women at the coalface’, and highlighted that the fact that this first group of female medical graduates in Australasia by virtue of doing their jobs, had overcome hurdles that many of us could not even fathom.   Pressures such as social stigma, the difficulty in obtaining residencies, and the public accounts belittling these women published in the newspapers. 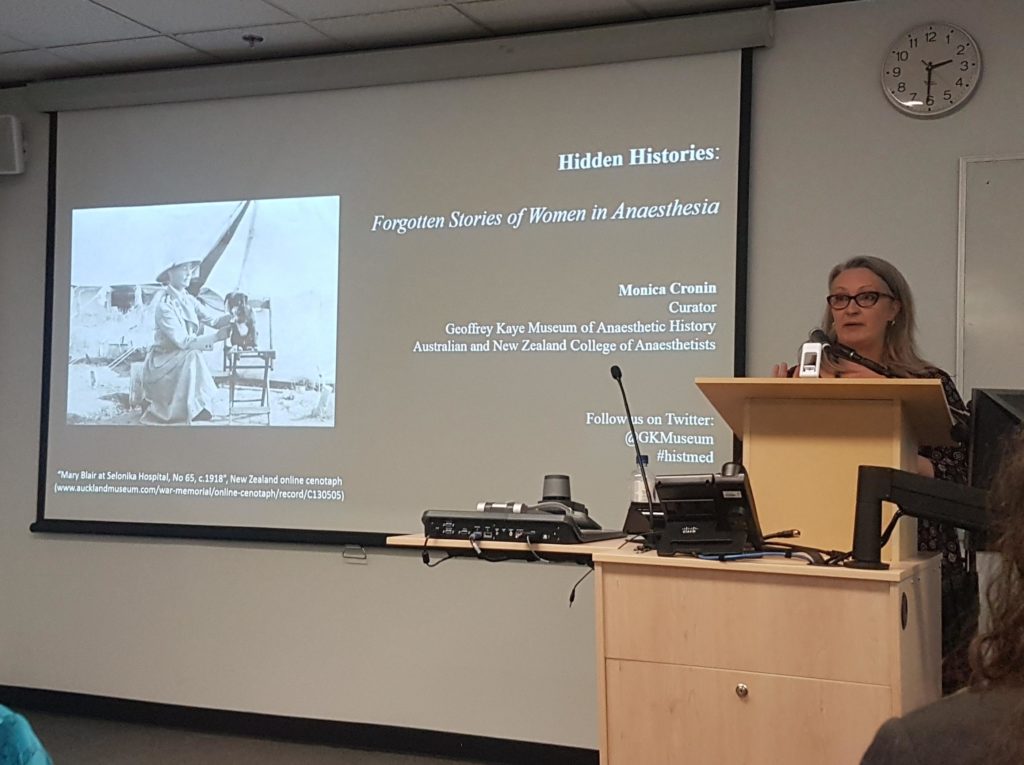 My presentation focussed on the way that we can use the archives of these women to understand the pressures they were faced with, both on a professional and personal level.  I used the Gwen Wilson archive to demonstrate this and discussed what of value and of non-value I had discovered in the archive, and then how to fit this into a wider narrative of medical women in the mid 20th century. 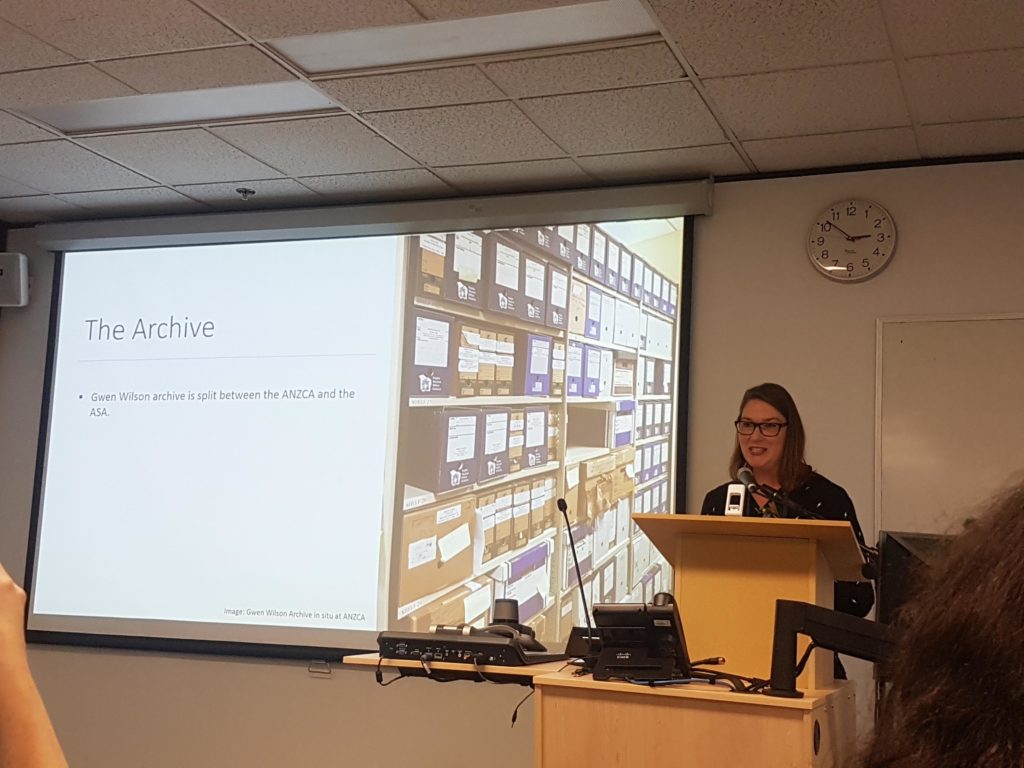 The floor opened to questions about the writing of histories of medical women of colour, an understanding of the pressures faced by medical women currently practicing and what themes we as historians can bring to the fore in our research.

Finally, for me the real theme of the conference has become taking what was previously implied  and unspoken, and digging into this further.  Looking for primary source material in archives and connecting everything these women did into a larger narrative.