Arts and Humanites at the 16th World Congress of Anaesthesiologists 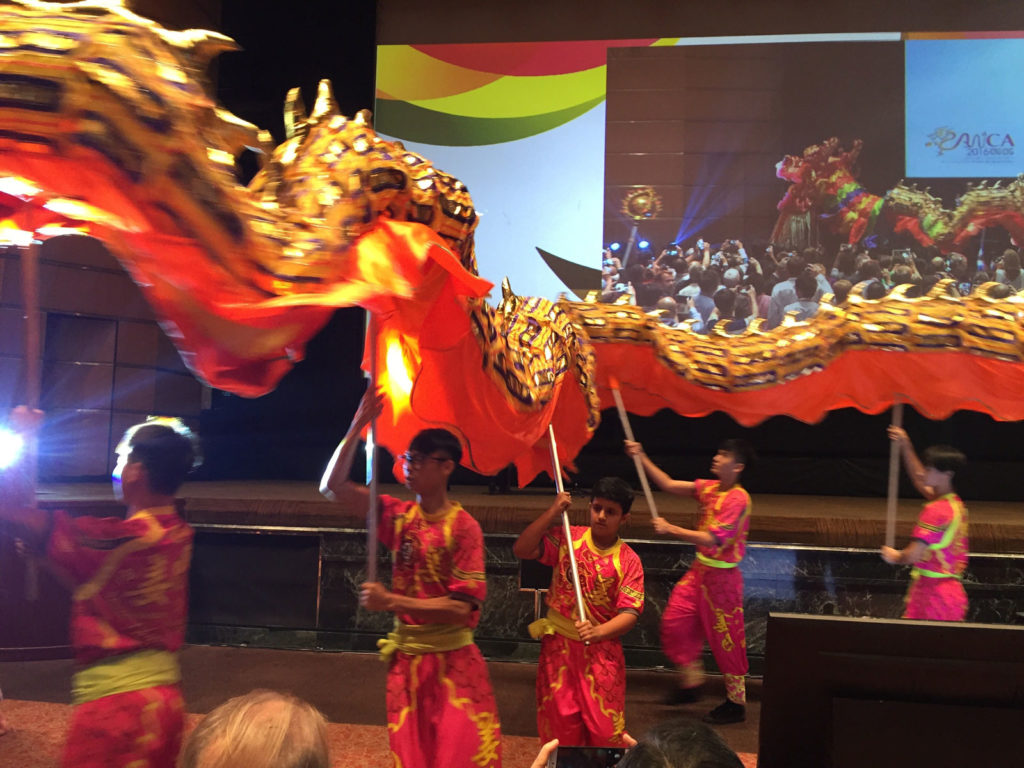 The 16th World Congress of Anaesthesiologists (WCA) was held in Hong Kong at the end of August. This event, which is held every four years, is attended by thousands of anaesthetists from all over the world. Usually there are a few history and ethical sessions squeezed into a jam-packed program but on this occasion the organisers decided to have a full Arts and Humanities track covering a much broader range of subjects. It was an ambitious plan but one which was enthusiastically embraced by the appointed committee with Doug Bacon at the helm, and by Tony Gin, the organiser of the scientific program. 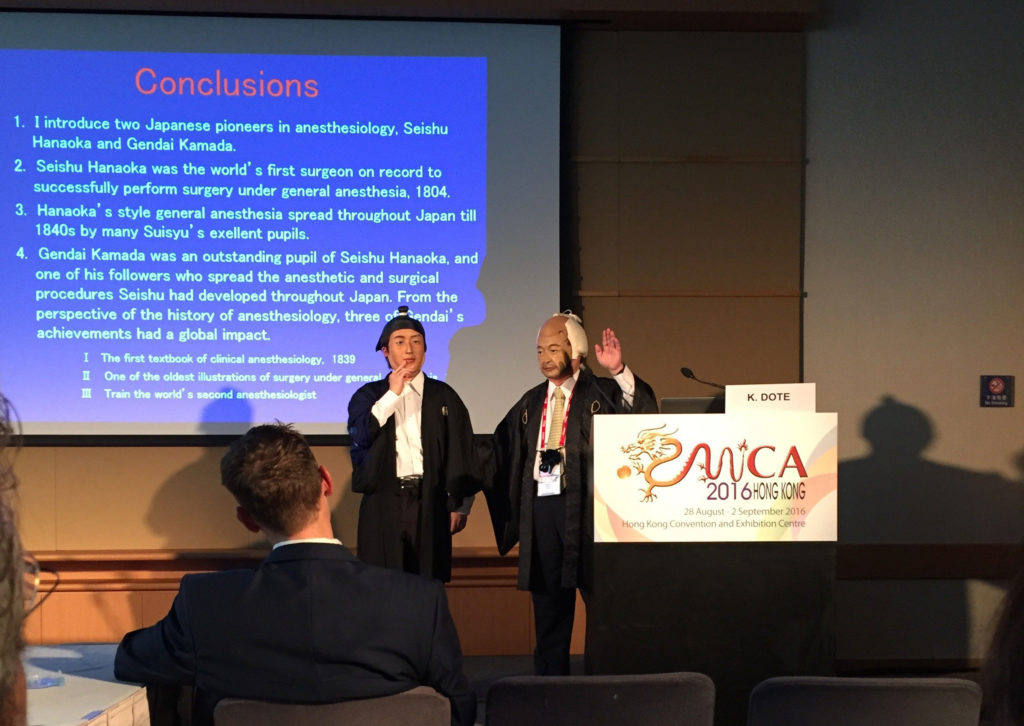 The result was an immensely satisfying week for many participants at the WCA. Every Arts and Humanities session was well attended with some stalwarts seemingly present every day.  The history sessions varied from presentations about collections and museums to explorations of the ancient methods of sedation.  The latter were enhanced by presentations from Japan relating to a series of operations conducted under deep oral sedation in the early part of the 19th century. Another session focused on Shakespeare and the role of pharmacology and doctors in his plays. This provided some fascinating insights – witches, for example, apparently believed that they could fly due to the hallucinogenic properties of various pharmacological substances. The final history session focused on art and satire in anaesthesia, providing unique insights into how the specialty has been perceived throughout time.

Several ethics sessions were held with an important international focus. Many cultural issues now arise due to the movements of people around the world; we all need to be aware of the sensitivities that may need to be addressed in seemingly straightforward situations. These issues were also highlighted in Doug Bacon’s discussion on how history can be used to teach professionalism, an important part of medical education.

Dr Catherine Crock and her team from the HUSH foundation provided another bold and innovative addition to the program. With a grant from the Australian Government, Cathy travelled to Hong Kong with the musician/composer Joe Chindamo, sound engineer Michael Letho, playwright and actor Alan Hopgood AM, Gay Hopgood, stage manager, the actors Jenny Seedsman, Lee Mason and Marcello Russo, and PR and Communications manager, Kate Johns.

Cathy made a brief speech at the Opening Ceremony explaining how the HUSH collection came about and reminding us of how terrifying the operating room can be to patients, and children in particular. Joe Chindamo, accompanied by the Salisbury string quartet, then played music he had composed for the HUSH collection, reminding us how calming the right music can be. Their performance was impressive, particularly as they had only met that afternoon. The string quartet is based in Hong Kong and the players had been communicating with Joe via email for months. Within a few hours they had clearly worked out how to make beautiful music together.

The humanities have an important role to play in health care provision and this was clearly represented by all the HUSH presentations. The two plays, “Hear Me” and “Do you know me?” were well attended and beautifully presented. They are both incredibly moving and it was extraordinary to see the emotion generated in the audiences. It was also very gratifying to see the level of participation from the audience when the discussion started – seemingly everyone in the room had something to say. The audience was very diverse with people from many countries and doctors at all levels of training contributing to the discussion. It gave us all a perspective on health care which was truly unique. The actors were really impressive. Their ability to play many roles within the play so convincingly and then come out of character to contribute to the discussion was masterful. To hear the playwright and actor, Alan Hopgood discuss the aims of the play was a privilege and all the actors contributed their own perspectives to the advantage of the audience. 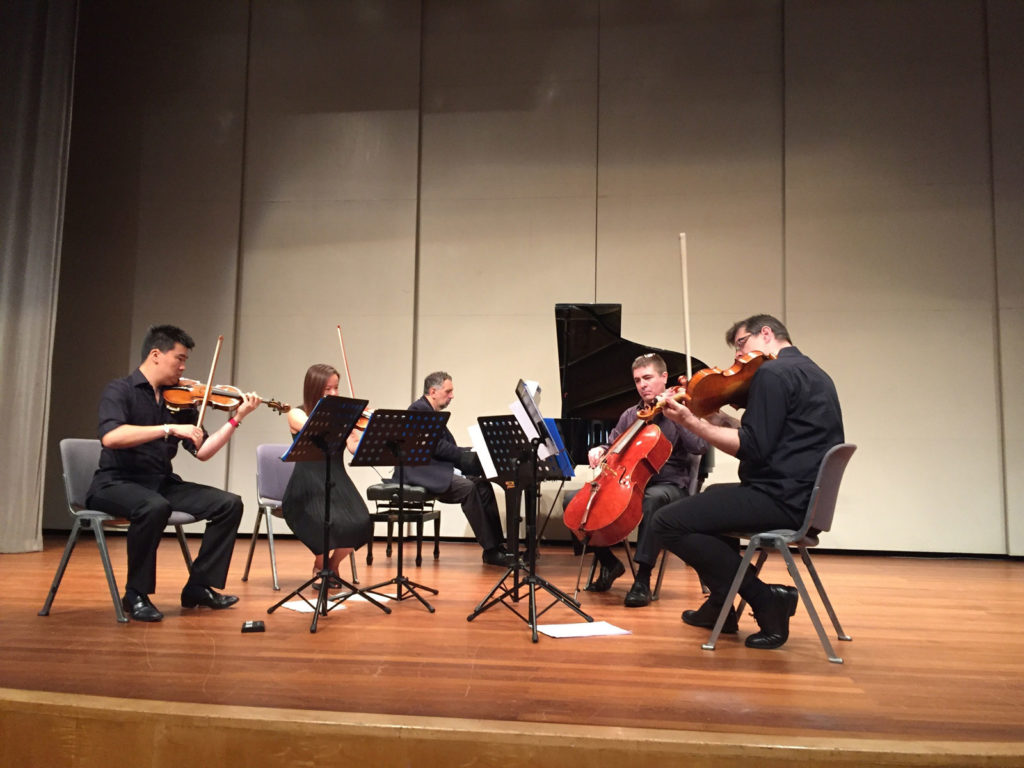 It was wonderful to be able to relax after these emotionally charged plays with the beautiful music provided by Joe Chindamo and the Salisbury string quartet. Joe has a special ability to communicate with the audience, not only with the music, but also at the podium explaining its origins. We were very privileged to hear how the HUSH project has been influential in his own musical career and to hear how confronting the hospital environment was to him. Tied up in our daily lives, we are apt to forget how hospitals feel to those who do not work there. It is an important part of what the HUSH team does – reminding us that our primary focus is the patient and their perspective is very different from our own.

We are all aware of the commitment that was required to arrange for such a large team of people to travel all the way to Hong Kong. They all made sacrifices to be there and we are immensely grateful. On the last day, an audience member asked if we could ensure that a comprehensive Arts and Humanities track could be provided at all future World Congresses as it had been the highlight of the meeting for them. Hopefully this is the start of a new focus on the humanities and its role in healthcare provision.  The humanities serve to remind us that it is the patient who is making the journey through the healthcare system and that our goals should not be just about curing a disease but about treating the patient and their family, and listening to their needs.