Dr David Fenwick is a retired anaesthetist from South Australia. In 2010, Dr Fenwick gifted the college a bronze statuette, representing Spiritus Anaesthesiae. In this blog post, Dr Fenwick describes his inspiration, as well as the benefits of anaesthesia and subsequent developments.

Spiritus Anaesthesiae was made and presented to our college to illustrate the spirit that pervades anaesthesia and how it has penetrated the rest of medicine. The statue was created using the “lost wax, broken mould” technique. 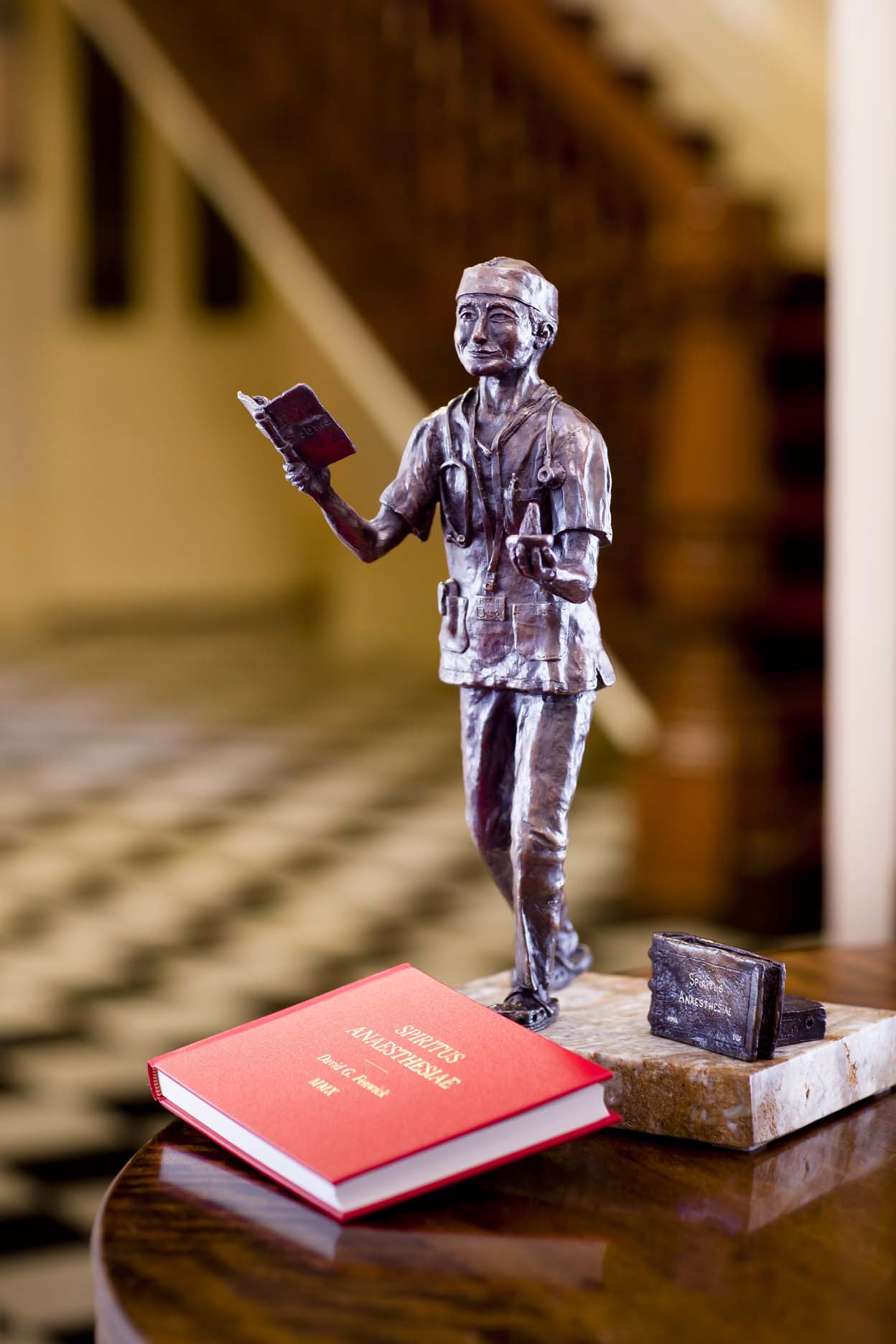 Bronze statue, Spritus Anaesthesiae, with red book of the same title. Both, by Dr David Fenwick

When doctors began practising anaesthesia, it soon became apparent that a new way of practice was needed. This entailed constant attendance on one patient at a time. Chloroform, early on, demonstrated that anaesthesia could be dangerous and caused anaesthetists to embrace morbidity and mortality as a means of monitoring their practice, and as a means of improving it. Education is another strong feature of our college.

Patients were obviously the most immediate beneficiaries of anaesthesia. The first medical branch to benefit was surgery, which underwent an explosion in its scope and success. Surgery has continued to expand and has caused anaesthesia to expand with it. Medical advances, such as the ability to control the immune system, have increased the scope of anaesthesia and the knowledge anaesthetists have to have, with transplant surgery, among many others.

Werner Forssmann, a surgeon who won the Nobel Prize for Medicine in December 1956, said of anaesthesia: “As one who has known the old ways, the scope of surgery has extended, almost unbelievably, with modern anaesthesiology.”

Anaesthetists became experts in supporting the respiration and circulation of the blood in critically ill or injured patients. They began to look after these patients in the recovery rooms of operating theatres. Eventually it was seen that the need for this care was beyond the capacity of the recovery rooms and separate facilities were built. Early on anaesthetists looked after these areas, called untensive care units. Gradually a new breed of doctor emerged which practised intensive care only. Initially they were educated through the Faculty of Intensive Care within our college. Soon it was clear that it was a new branch of medicine and the College of Intensive Care Medicine was formed.

Anaesthetists are well educated in the handling and use of gases, so it is no surprise that they took an interest in hyper and hypobaric medicine. They were at the forefront of developing Hyperbaric Units in major hospitals for the treatment of “The Bends” in divers.

Emergency medicine had input from anaesthesia when it was forming as a recognised branch of medicine and in setting up its training program.

Anaesthetists set up the early retrieval services, particularly using air retrieval. Their skills in supporting patients were essential. Resuscitation, stabilisation, transport and handover are the stages of retrieval and they fulfil the needs of military medicine exceptionally well, making anaesthetists valued members of these teams.

Another area of medicine, which is of vital importance to anaesthetists is the control of pain. Anaesthetists provide pain control when it is needed. This is usually acute pain and its control is definitely needed during and after the operation. It may also be needed before the operation. This has developed into a specialised branch of medicine and is catered for in the Faculty of Pain Medicine in our College. Whether it becomes a College in its own right remains to be seen.

The range of parameters that can be measured when providing anaesthesia has expanded greatly. When the inspired gas is controlled, it is important to measure how much oxygen is in the mixture. The passage of the oxygen through the body can be measured, which is needed to maintain the Oxygen Cascade to keep the patient’s metabolism normal during the anaesthetic. When a patient’s respiration is controlled, it is necessary to know if it is correct by measuring the carbon dioxide in the expired gas. Anaesthetists monitor everything they can.

Maternal and infant safety has been greatly improved in our society, due to the ready availability of anaesthesia and analgesia. This is one particular area where anaesthetists have been very careful with their audits and the provision of patient safety. Labour pain can be controlled and Caesarean sections carried out swiftly and safely, improving outcomes both for mother and baby. “Chloroform a la reine”, in 1853, greatly helped the acceptance of anaesthesia by providing analgesia to Queen Victoria for the birth of her last two children.

Many medical specialties have been able to progress because of anaesthesia. These include:

Anaesthesia permits invasive diagnostic and interventional procedures to be undertaken, with comfort for the patient.

Epilogue
Medicine without anaesthesia is unthinkable. It has become an expected part of human life. Anaesthesia in Australia and New Zealand has a well earned reputation for quality and safety. It comes from the conduct of generations of practitioners in anaesthesia, the conduct of the ASA, College and the many departments of anaesthesia around the country. To maintain this reputation, anaesthesia must be well taught, not only by the College, but also by each and every consultant who interacts with trainees.

I am sure that anaesthesia will continue to evolve and rise to any challenge it encounters, while maintaining its reputation for quality and safety.

I hope the foregoing, along with the Spiritus Anaesthesiae, gives a glimpse into the hidden world of anaesthesia.

This work is presented as a celebration of the advent of painless surgery and of what anaesthesia has become.