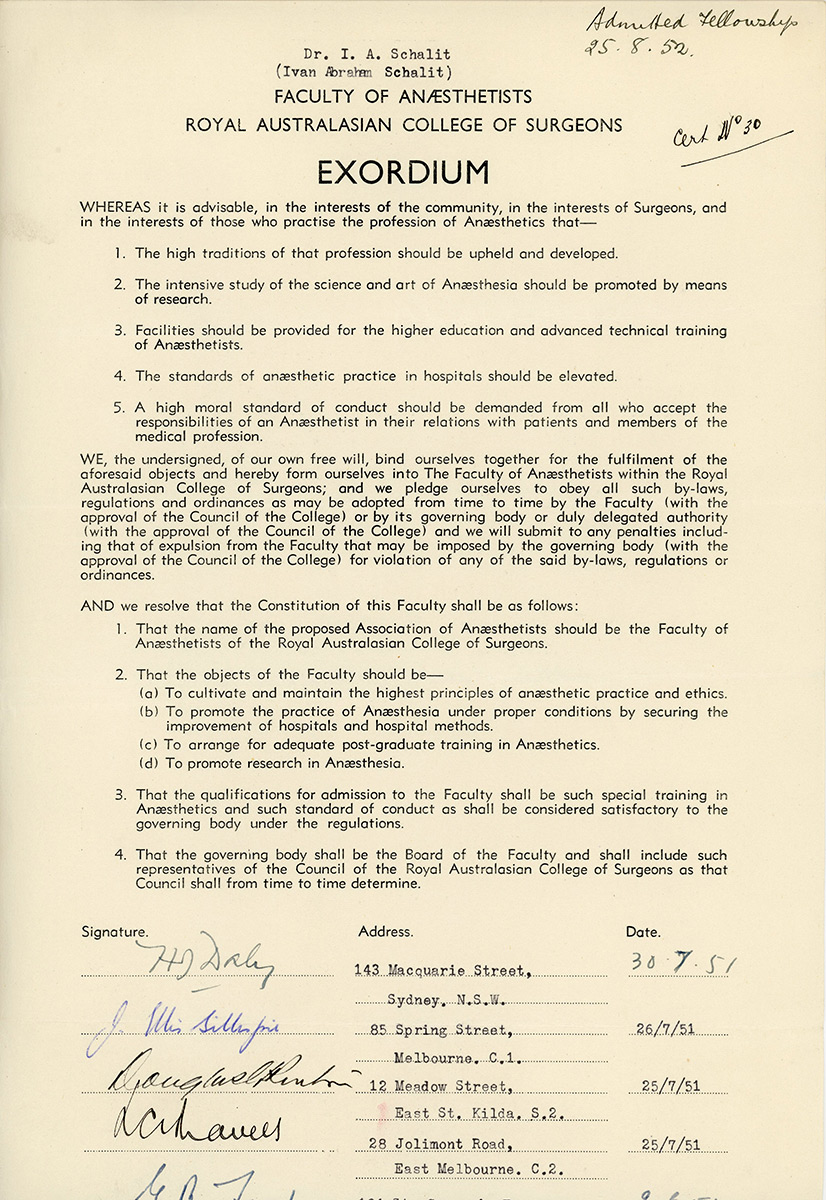 Ivan Abraham Schalit significantly contributed to post-operative and intensive care practices in Australia. After graduating from the University of Melbourne in 1936, Schalit travelled to the United Kingdom to work and complete his Diploma of Anaesthetics. With the outbreak of World War II Schalit enlisted in the British Army serving as their anaesthetist on the Salisbury Plains and in Burma and India. On returning to Australia, he began his professional appointment at the Royal Newcastle Hospital, during a period of great innovation and expansion. During his career at the Newcastle Hospital, Schalit developed post-operative care units for males and females. These were the early forerunners for modern post-operative care.

Ivan Abraham Schalit was born in 1911 in Prahran Melbourne. According to his birth certificate, his parents were Moise Aaron Schalit and Harrie May (formerly Goldberg). Schalit attended the University of Melbourne completing his Bachelor of Medicine, Bachelor of Surgery in 1936. Ten years later in 1946 Scahlit received his Diploma in Anaesthetics from the Royal College of Physicians and Surgeons.

After graduating from the University of Melbourne, Schalit travelled to the United Kingdom to undertake his postgraduate study. A Diploma in Anaesthetics was unavailable in either Australian or New Zealand during this period. With the outbreak of World War II, Schalit enlisted into the British Army. He joined the plastic surgical unit and worked on Salisbury Plain. Later in the war he worked also in Burma and India for the British Army.

On returning to Australia in 1946, Schalit applied for a job at the Newcastle Hospital. This was quite a controversial decision for Schalit. During this period the Newcastle Hospital under the direction of Chris McCaffrey who transformed the hospital into a centre for innovation in healthcare.

Organised medical groups were opposed to these alterations as it was running in parallel to already established practices. Despite this, Schalit accepted employment with the hospital and worked until 1968. From 1948 he served in the position of Director of Anaesthetics and Medical Officer in charge of the operating theatres. During this time period Schalit founded two post-operative wards, one for male and one for females. These were the early forerunners of recovery and intensive care units.

After suffering a heart attack in the 1960s, Schalit transferred to a less demanding role at the Belmont Hospital. He suffered more ill health later in life and died in 1986.

His contributions to anaesthetics, especially with regards to the early work on intensive care and post-operative treatment, earned Schalit a position as Found Fellow of the Faculty of Anaesthetist, Royal Australasian College of Surgeons.

Schalit also contributed to knowledge of curare in tetanus. He also was a founding member of the development of the department of anaesthesia in the Newcastle Hospital.