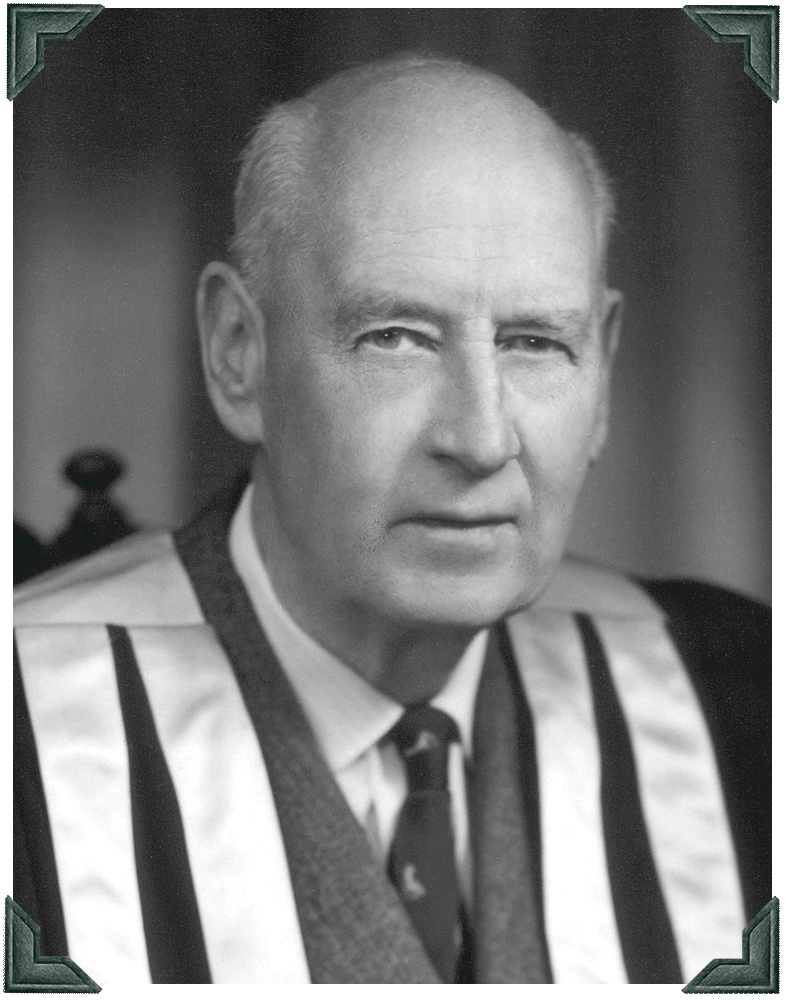 Harry John Daly is recognised as one of the most important anaesthetists in Australian history.  He was the first Australian anaesthetist to use curare in a surgical anaesthesia setting in 1945.  This initiative was recognised with a Rockefeller Grant, which enabled Daly to read his paper Experiences with Curare in Australia to the American Medical Association in 1949.  He was heavily involved with the creation of the Faculty of Anaesthetists within the Royal Australasian College of Surgeons, elected Vice Dean at foundation in 1952, and Acting Dean in 1954.  Health problems finally forced Daly to step down from his position in 1956, but he remained active within the community for many years to come.

Daly is significant to anaesthesia practice in Australia as he championed the sharing of knowledge across international borders, and promoted the uniquely Australian advances in the field of anaesthesia.

Harry John Daly was born on the 3 August, 1893 to Henry and Victoria Daly of Glebe, Sydney, NSW. His primary education was conducted locally by the Sisters of the Good Samaritan and then St Ignatius College from 1908 till 1913 to finalise his secondary education.

In 1914, Daly began his tertiary study at the University of Sydney, with entry into the Bachelor of Medicine and the Bachelor of Surgery. In 1915 he volunteered for army service and was declined, as medical students were required to finish their course before formally entering military service. Daly graduated from the University of Sydney in 1918 with a Master of Surgery, and spent the next two years as the Resident Medical Officer at the Prince Alfred Hospital in Sydney.

Daly married Jean Edmunds in 1921, and entered into general practice in Haberfield, NSW. At this time he was also appointed Honorary Physician at Lewisham Hospital, Sydney. It was in this position he was required to administer numerous anaesthetics, leading to his appointment as Honorary Anaesthetist at Lewisham.

In 1929 Daly attended the British Medical Association (BMA) Australasia Congress which included the first Section on Anaesthetics as part of its program. From this congress, the first Section of Anaesthesia was formed within the NSW state branch of the BMA, with Daly confirmed as the first secretary in 1930. It was during this and later congresses that Daly met other specialist anaesthetists with whom he would later facilitate the establishment of the Australian Society of Anaesthetists (ASA) in 1934, and the Faculty of Anaesthetists as a part of the Royal College of Surgeons (RACS) in 1952.

Daly and his wife undertook a tour of England and Ireland, Europe, Canada and USA in 1935[i], visiting many prominent anaesthetists and anaesthetic centres. During this time Daly observed many new techniques which he brought back to his practice in Australia. He continued to correspond with his overseas counterparts which benefited both Australian anaesthetic practice, and that of others abroad.

On his return in 1936, Daly was then appointed to the role of Honorary Anaesthetist at the Sydney Hospital, and then in 1937 to the same position at St Vincent’s Hospital. In 1942 Daly became a member of the Royal Australian College of Surgeons of England, and was then elevated to fellowship in 1948. In 1946, Daly was elected the third President of the ASA. Daly also lectured as an anaesthesia specialist for the NSW Post-Graduate Committee in Medicine and later the Prince Henry Post-Graduate Hospital. He was heavily involved in the preparation of regulations, curricula, courses and examination for the first Diploma of Anaesthesia instituted in Australia at Sydney University in 1944.[ii]

A discussion of the use of curare in anaesthesia with Lewis Wright from E R Squibb and Sons in 1942, resulted in Daly’s acquisition of some ampoules of Intocostrin.[iii] The idea behind the use of this preparation for relaxation during anaesthesia had been discussed earlier that year by Harold Griffiths of Montreal. Daly was eager to trial this method in Australia, but was unable to find a surgeon open to it. Three years later in 1945, Daly gave the first curare injection for relaxation during anaesthesia in Australia. This resulted in Daly being awarded a Rockefeller Grant to enable him to present the paper Experiences with Curare in Australia to the American Medical Association in 1949. 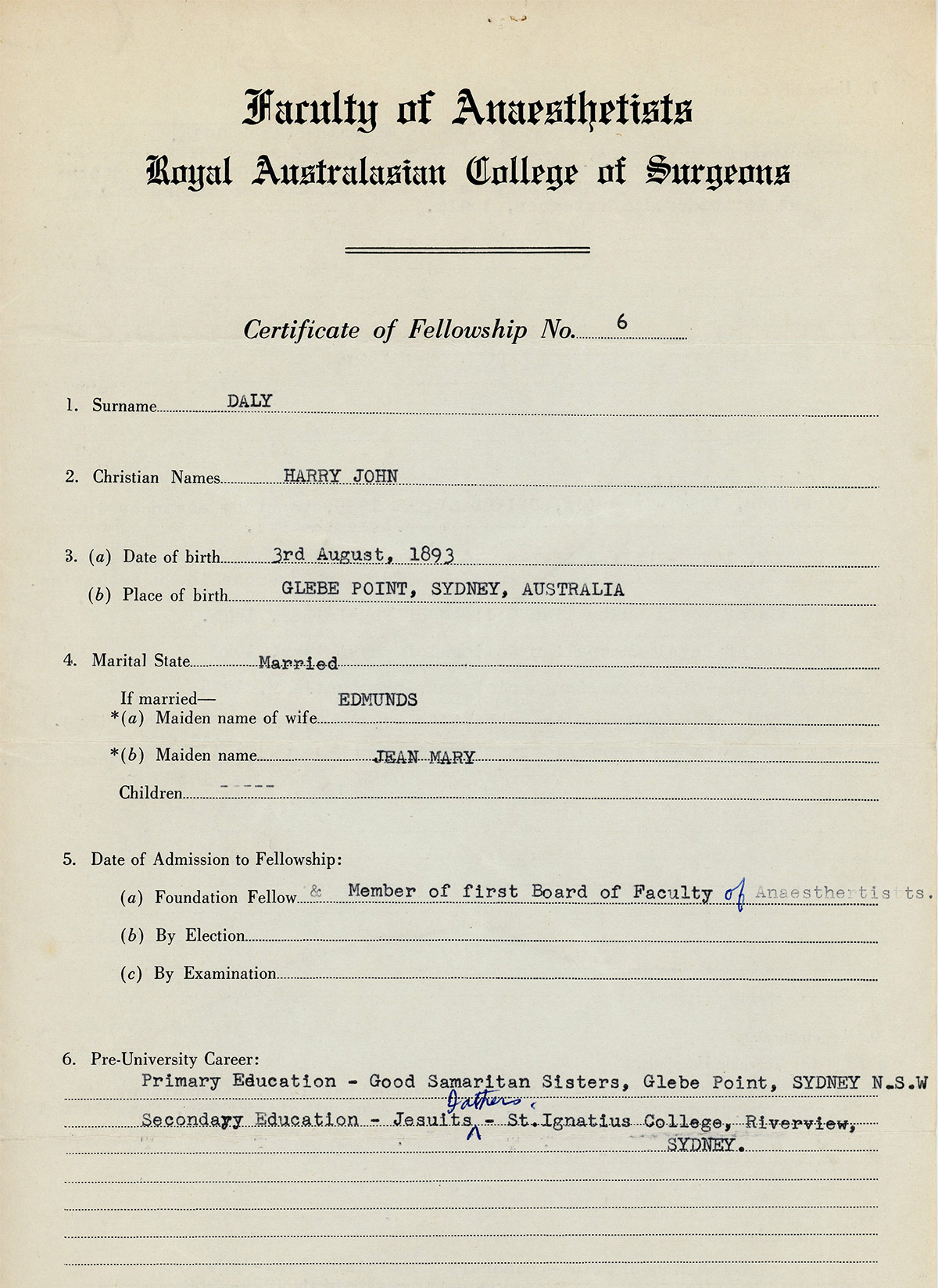 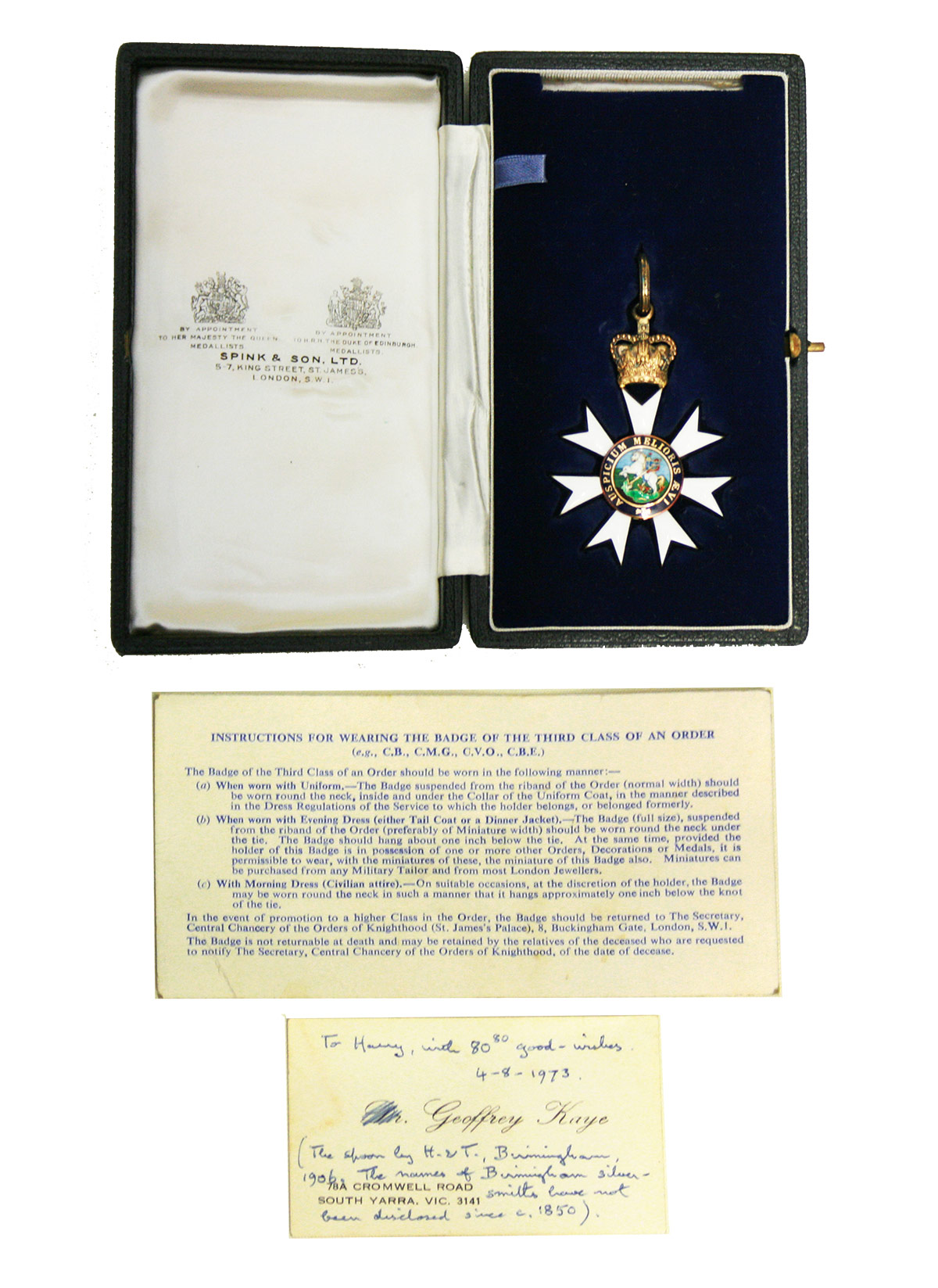 Daly was integral in the inauguration of the Faculty of Anaesthetists in 1952. The ASA had charged him with solving the problems around the conferring of a diploma of anaesthesia. Daly had been in London and observed the English Faculty of Anaesthetists operating within the Royal College of Surgeons. On his journey home in 1950, his ship was delayed in Adelaide, and a meeting with Sir Ivan Jose and Glen and Mary Burnell was organised.[iv] After this meeting Daly had a clear direction around how to move forward toward a faculty.

In 1952 Daly was voted as the first vice Dean of the Faculty and in 1954, became Acting Dean due to the ill health of the previous Dean, Douglas Renton. By 1956 Daly himself needed to step down from the position due to his increasing deafness. These progressing health issues also made it difficult for Daly to complete his work for the board and participate in other faculty activities.

In 1962 Daly was awarded an Honorary Fellowship to the English Faculty of Anaesthetists, which was limited to a total of 15 members within the Commonwealth at any one time.[v] He was also admitted to the Distinguished Order of St Michael and St George by Her Majesty Queen Elizabeth II for services to medicine and anaesthesia in 1966. In 1969 he was awarded the Orton Medal of the Faculty, in recognition of his distinguished services to anaesthesia in Australia. A year later, he was admitted to Honorary Fellowship of the Faculty and, in 1973, Honorary Fellowship of the Royal Australasian College of Surgeons.[vi]

During the 1950s Daly established a collection of objects and material related to anaesthesia. He was passionate about preserving and understanding the history that stemmed from these pieces. The Harry Daly collection formed the basis for a museum in his name and now houses over 2000 objects.

Genesis of a Faculty. (2002). In A. W. Beasley, The Mantle of Surgery. Melbourne: Royal Australasian College of Surgeons.