The Boston Museum of Fine Art

There is a growing movement that brings together the forces of art and science. Often, it’s presented as an artist’s interpretation of a scientific moment, such as Persistence of Vision: Antarctica, a project to recreate modern versions of some of the most iconic photographs from Antarctica. The recent opening of the Science Gallery in Melbourne also shows an intersection (or what they call “collision”) of art and science with its first exhibition Blood: Attract and Repel. It features 22 artists, along with some incredible public programming, exploring themes surrounding blood, such as taboo, stigma, identity, giving, health and future. On hand are helpful “explainers” from the University of Melbourne’s science programs to help you out with the science.

So, it only makes sense that medicine, as a branch of science, has also looked to the arts. The Boston Museum of Fine Art (MFA) has been running an Art and Medicine Workshop since 2010 for internal medicine residents from the Brigham and Women’s Hospital. The idea of the workshop is to help build on the Humanistic Curriculum, which was created in 1997, to foster humanism in medical residents, and address issues such as burnout and empathy erosion. 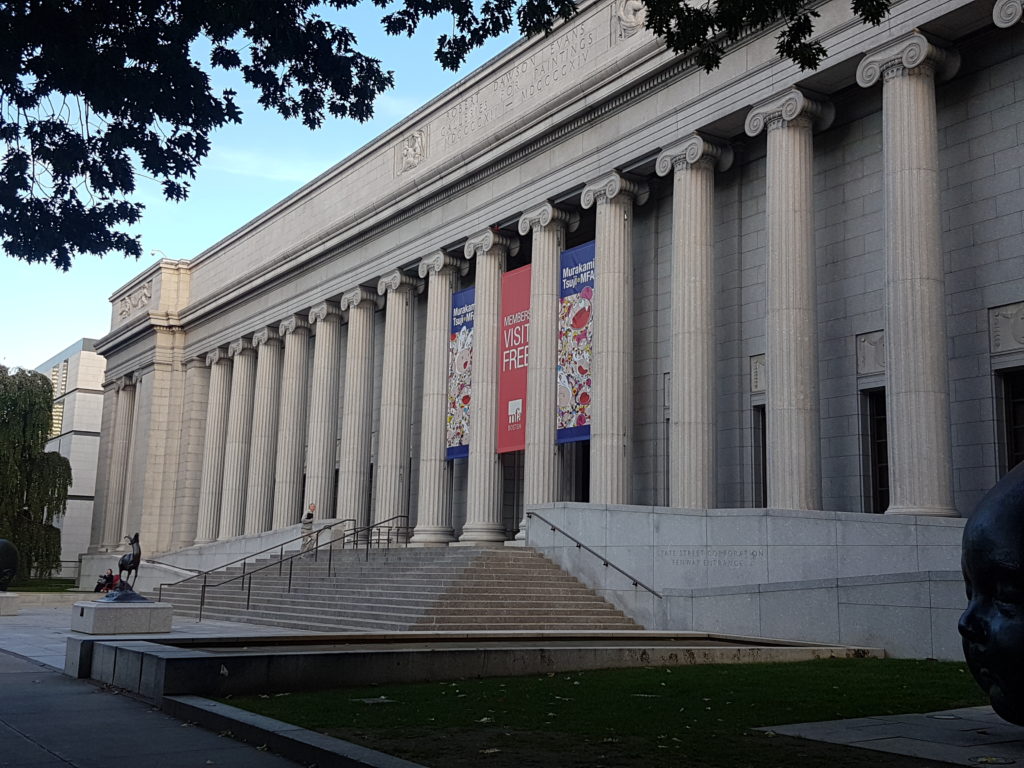 From the very beginning, the workshop had the lofty goals of “…using art to enable residents to connect deeply to their work in a way that might otherwise prove difficult as well as to reconnect with themselves and their colleagues in a very human way”.[1]

I was lucky enough to be able to sit in on a workshop while in Boston, and see it unfold for myself. The workshop was led by two incredible women, Nora Elton, an arts educator with MFA, and Dr Liz Harry, physician and medical educator at the Brigham and Women’s Hospital.

Nora led the participants through a series of gallery exercises beginning with a Visual Thinking Strategies exercise. She sat the group in front of three works of art, two sculptures and a painting, and asked an apparently simple question, “What is going on in this work?” As answers started to come forward, she asked a second question, “What do you see that makes you say that?”. Finally, as the answers slowed down, she prompted again, “What more can we find?” Her gentle prompting encouraged everyone in the workshop to share their ideas, and not everyone agreed. But, agreement isn’t required. The point of the exercise is not to accurately determine what’s going on in the artwork, or the artist’s intent, it’s not an art history workshop, but to explore the concept of multiple interpretations – ambiguity – when different people are presented with the exact same information. Liz then skilfully led the group into a discussion about ambiguity in the workplace and what it means for medical professionals.

The next exercise was held at a slightly more frenetic pace. Each participant was given a clipboard with some paper, and a pencil, and asked to draw what was in front of them, with only 30 seconds to execute the task before the work was passed on to the next person. That person would work for another 30 seconds to add to the work of the first person. Eventually, each sketch made its way through the whole group and the finished pieces were brought back together and viewed as a collective. Again, Liz was able to turn the activity into an analogy for the workplace. Most literally, it showed the difficulties of picking up someone else’s work, but there were other ideas drawn from the exercise as well, such as the complexity of perspective, and a frank and honest discussion took place amongst the participants.

The third exercise took us into yet another gallery (the one with the Rothko paintings!) and the small group was broken up into three even smaller ones. Each was presented with a different work (they weren’t all Rothkos) and asked to address two questions. The first question was “What do you notice about this work?” and the second was “In what ways does this work relate to your work-self and your authentic-self?”

After some discussion, the group was brought back together as a whole and the next exercise took place in front of a marble statue, sculpted in the 19th Century as a memorial to a young wife, lost to pneumonia, leaving behind a 15 month old son and a grieving artist husband. It’s a sculpture of the young woman in a state of beautiful repose, gifted to the MFA so her son could visit her as he grew. This exercise began with their responses to the artwork, and moved rather quickly into their responses to end of life situations at work. There was no need to tease out the analogy, and they openly discussed the way they deal with it when it inevitably arrives, the procedures in place at the hospital and the impact it has on their “not-work” selves. With this exercise in particular, the silences were just as important as the conversation. It allowed time to think, absorb other people’s responses and evaluate their own response.

The final exercise took place in a recreated Buddhist temple inside the museum. It was here Liz led the group through a guided mindfulness meditation. This was the perfect way to finish the workshop, as it not only provided an opportunity to pull all the pieces of the evening together, but it introduced an actual skill set which, if practiced, can be called on almost on demand.

At the end of the workshop, the group all gathered together again and headed out to dinner where I’m sure some further debriefing took place.

Last year, when the Geoffrey Kaye Museum first heard about this program, we wanted to try something similar. ANZCA already has a Welfare of Anaesthetists Special Interest Group but, as a firm believer in the power of art to stimulate discussion and promote a sense of wellbeing, we were looking for something practical. The Queensland Art Gallery/Gallery of Modern Art were interested and worked closely with Anna Hallett from the SIG, to put a workshop together for the 2017 Annual Scientific Meeting held in Brisbane.

While we haven’t done yet done any formal follow up to find out if the participants are still experiencing any benefit from attending, the initial verbal feedback was very positive.

In 2018, we’re teaming up with the Museum of Contemporary Art in Sydney to run another workshop. It has the same goals and, again, runs as part of the Annual Scientific Meeting. Have a look through the ASM program and maybe come along yourself.